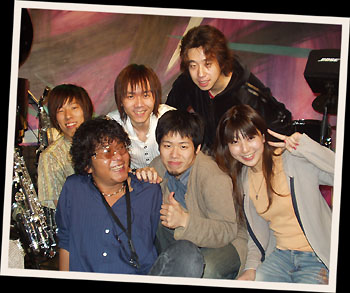 When I was a little boy, I was kind of mischievous, admiring a baseball star Sadaharu Oh of Yomiuri Giants.

But I was not attracted by those kinds of music. I loved popular music of those days, but I hated to go piano lessons my mother forced me to.

Ironically that piano lesson might have changed my destiny.
As soon as I entered junior high school, suddenly I became interested in wind instruments, and I tried to join the school brass band.

The school I entered was Gakushuin Junior High School.
School brass band was on the brink of being eliminated due to lack of members.

“You play trumpet. There is nobody who carries melody in this band.”
Firstly I was told so by the band leader. Trumpet is a star of brass bands. Everybody wants to play it.
I brought a trumpet to my home and started practicing.
I don’t know if I can’t look things straight, but, I totally could not understand the playing skill of trumpet using vibrated lips when making sound and the usage of only 3 valves to make 12 notes in one octave.

Unlike the trumpet, I really loved the alto sax. I was too much into it to leave it even when I sleep.

No more brass bands in my mind.

I begged my parents to buy me a sax as my own horn. Then I started to practice in my own way.
Fascinated by Sadao Watanabe’s “California Shower” on-aired as a TV spot then, I went straight to the world of Fusion music which was at its heyday in those days.

Spirogyra, Grover Washington Jr….firstly I liked those, rather simple sounds. Then I became to love The Crusaders shifting my focus on horns from alto sax to tenor sax. An encounter with Kosuke Mine of Native Son conclusively fixed the direction I want to go.

Again, I begged my parents to buy me a tenor sax as a congratulations present for passing an entering examination for the high school attached to Chuo University.

2 years later, I finally succeed to ask Kosuke Mine to instruct me how to play.
And I jumped into the world of professional music at a live house named JIROKICHI in Koenji, Tokyo, which was a home ground of Native Son, the band Kosuke Mine was in.

However, at that point, Fusion music had already lost its momentum. People started to focus on reaffirmation of Acoustic Jazz lead by musicians such as Wynton Marsalis.

“I wanted to do Fusion. But there is no place to do it.”

From the beginning, I felt keen severity of being professional.

And I realized that without obtaining the knowledge of the history of Jazz, I can not play the real Fusion. Takehiro Honda, then Native Son’s pianist and I truly admire him, advised me. “Sonny Rollins fits you more than Coltrane. Listen to Rollins to the limit, again and again!” His words triggered me to tackle with the sound of Sonny Rollins.

I tried each and every style of performing aiming at reaching Sonny Rollins who had mastered various fashions of music styles such as Be-Bop, Free Jazz, Fusion and so on. I’ve kept running with such enthusiasm for ten years.

Then I flied to New York. Then I played Fusion again, the music I originally wanted to play.
I’d been always fostered surrounded by experienced predecessors. So I wanted those elder musicians to become my band-members when I launched my own band Jazz Roots then.

As I mentioned before, those experiences of mine let me do a new try to jump into a bunch of young musicians when I was entering my late thirties.

When I was young, I was reckless, but I was purely tackling with music without regarding my appearances.
I identify young me of those days and these young musicians. “JUN USUBA & YOUNG RABBITS” is a project which contains the possibility to make my dream come true. Finally, it has launched.