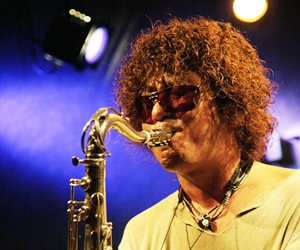 Jun Usuba was born on May 8th, 1968 in Tokyo. He graduated from Chuo University, Business Administration Department of Faculty of Commerce.

He started learning how to play alto saxophone on his own then switched to tenor saxophone at age 16. He idolized Kosuke Mine (ts) learning a lot from him.

At age around 18, he started his professional career with his own group, at the same time he joined New Tide Jazz Orchestra of Kunitachi College of Music.

Since then he played as a member of various groups such as of Ryojiro Furusawa (ds), Yoshiaki Okayasu (g), Yoshio Suzuki (b) and MATSURI, Tomonao Hara (tp), Hiroshi Murakami (ds), Isao Miyoshi (g), Takeshi Shibuya (p)’s Orchestra, Takehiro Honda (p), Tamaya Honda (ds), and many others.

In 1990, he played with Branford Marsalis (ts). In 1991, at the tender age of 23, he was selected as a Japan tour member of Kei Akagi, the pianist formerly belonged to Miles Davis’ Group. He also played with Terumasa Hino (tp), Masabumi Kikuchi (p), and Yosiaki Masuo (g).

Not only that, he has cultivated deep friendship with Wilton Felder and Joe Sample of The Crusaders.

He contributed to Jazz Live Performances of Masanobu Takashima, a Japanese actor and his old friend since the boyhood, as a band leader and an arranger offering original songs to Takashima’s CDs.

In the pop music field also, he joined so many recordings and live performances of so many singers and bands such as MISIA, UA, CHARA, SILVA, KOHHY, Naomi Tamura, Eikichi Yazawa, aiko, LYRICO, SEATBELTS, Masayuki Suzuki, Tetsuro Oda, and so on.

In 1996 he began the activity of his own band JUN USUBA JAZZ ROOTS playing basically his original tunes. Its sound is based on Jazz, Funk, Brazilian Music inspired by many other, wide-ranged musical genres.

On February 21st, 2001, he released his first album with his own band ” JUN USUBA / JAZZ ROOTS” from Polystar Records.

His original tune “SPRING CALYPSO” from the album “JUN USUBA / JAZZ ROOTS” was picked-up by a TV program of a cooking show, “OKAZU NO COOKING” (TV Asahi, Japan) as a theme music, then air-played for 1 year. Usuba himself also appeared in that show as a guest.

In 2005 he played at BLUE NOTE in New York.
His performance was highly appreciated.

He has been continuing live performances with his own Jazz quartet in parallel with his main activity, “JUN USUBA JAZZ ROOTS”.

And he is proactively participating in such activities as CAOBA BIG BAND which is lead by Shiro Sasaki (tp), numerous studio works and supporting live performances straddling various musical genres.