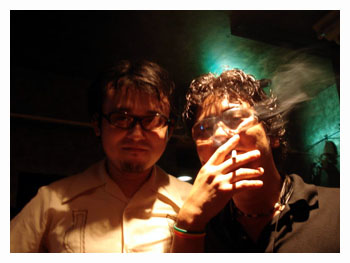 Yuichi Hirakawa, a drummer, and I are same age. I met him when I was in high school.

I met him at “Jazz Big Band for Junior High and High School Students” established then by YAMAHA, Shibuya branch.

My best friend, an actor, Masanobu Takashima was also in that band.

Even called Jazz Big Band, it was difficult to find someone really involved in a real Jazz among those members who were still junior high and high school students. As for me, I was for real, so became friends immediately with Hirakawa and Takashima who were also same as me. They are still good friends of mine.

After that Hirakawa entered Waseda University. He joined “Waseda High Society Orchestra” then.

As for me, I entered Chuo University, but I joined “New Tide Orchestra of Kunitachi College of Music”.

We were in different Jazz circles. But there was an opportunity just once to play together at a joint performance of big bands of several universities. We played in a band of selected musicians as a high-light of the day.

After graduation, I continued to play in Japan as a professional musician while Hirakawa entered Barklee College of Music in Boston, the royalty of Jazz musical education

After that Hirakawa went to New York and he has been continuing to play there.

Everytime he came back to Japan, he called me and came to me to play in my band.

Everytime he came back to Japan, his style of playing changed.
Everytime I listened to his play, I thought I wanted to go to New York also to feel the real Jazz in a real place.

In 1996, that dream of mine came true.
I went to New York for the first time.

In New York, I found Hirakawa much more trustworthy than ever.

Thanks to him, I really had a meaningful time there.

Hirakawa told me, “You enjoyed the whole year’s life in New York only during only 10 days.”

In 2005, he invited me to play at his band’s live performance at BLUE NOTE New York.

This time we played together only twice in Japan.
Next time I want to make it more.

He is my homeboy. And I am really proud of him continuing his performances.

Our friendship will last longer.