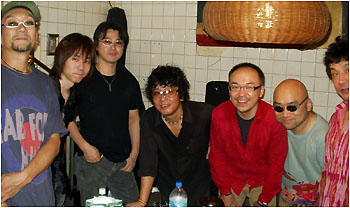 I started the activity of live performances with the band named “JUN USUBA JAZZ ROOTS” 1996. The concept of the band is to play music, mainly my original songs.

“JAZZ ROOTS” is rather a title of my live performances than the name of the band. With such a nuance, the two albums of mine have this name also.

The time when I was firstly fascinated by music, around 1980, various mixed styles of music were everywhere. Even for Jazz, the mainstream was the genres such as “Crossover” or “Fusion” which proactively featured electric instruments.

I absorbed various kinds of music which I could feel in real time, and came to want to play them by myself.

I think it’s very difficult how I should interpret the genre of JAZZ.

Because, it is deeply related to the culture and the history which are different from those of Japan’s

But I wanted to play the music with respecting what I think as JAZZ, being based on it, bringing new elements I am inspired by.
That’s why I used the name “JAZZ ROOTS”.

I want to appreciate any kinds of music I liked open-heartedly in this real time.
After that, I want to create something original coming through the filter of myself.

2 years ago I suspended the activity of “JAZZ ROOTS” then tried to figure out what I should have done for a year. Then finally I realized that I needed “JAZZ ROOTS” in order to play the music of JUN USUBA in the most appropriate manner of JUN USUBA.

I wish there was a band with such great musicians…

I asked those musicians to play with me.
I am a band leader, but at the same time, I am the biggest fan of them.